How to Captivate Prospects at Networking Events 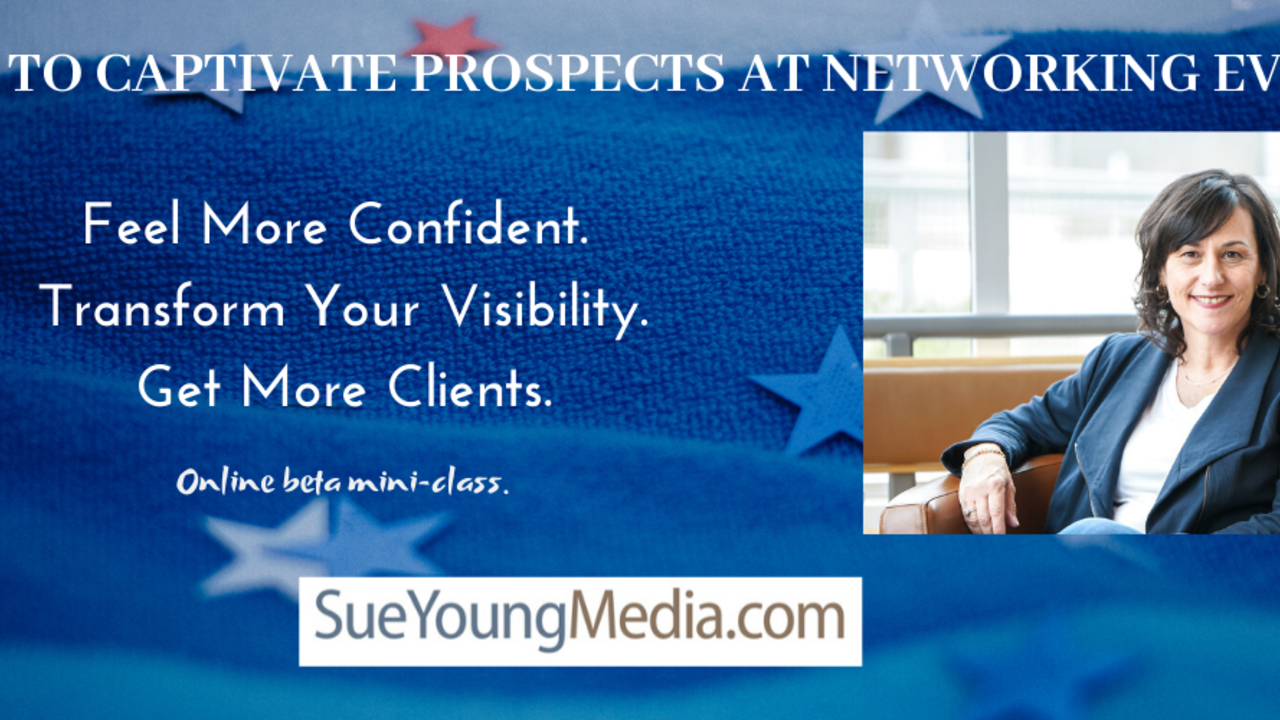 Want to learn how to easily captivate prospects when networking?

I’m launching a new online course on how to create a clear and simple introduction when meeting new people at networking events.

This is perfect if you’re frustrated with your 30-second introduction and want to know the right words to use, and how to confidently explain yourself so folks will listen and want to hire—and refer you.

I'm looking to beta test the material in exchange for feedback and testimonials. The course value is $597! No charge for you!

Here are some things we MAY cover:

How to Plan Your 2020 Content Calendar and Get More Visibility

Posting valuable content consistently can quickly attract a community of followers and build your credibility.

Trust me, planning out your posts, Instagram stories and videos is much better than treating your calendar as a crapshoot. Showing up for your audience with solid content helps build relationships, trust, and business.

{RELATED: COMMUNICATE WITH CONFIDENCE IN 2020. SIGN UP FOR PRIVATE 1:1  COACHING WITH SUSAN AND GET OUT OF YOUR OWN WAY}

As your online visibility increases, let's be intentional about your media visibility, too.

Let's go day-by-day, week-by-week so it is manageable and actually...fun! It's easier than you may imagine because you're talking about your passion and niche while helping others overcome a challenge.

Inside the webinar, (19:00 on the video counter), you'll get right to the part where I teach about...

10 Tips on How to Write for Today's Readers 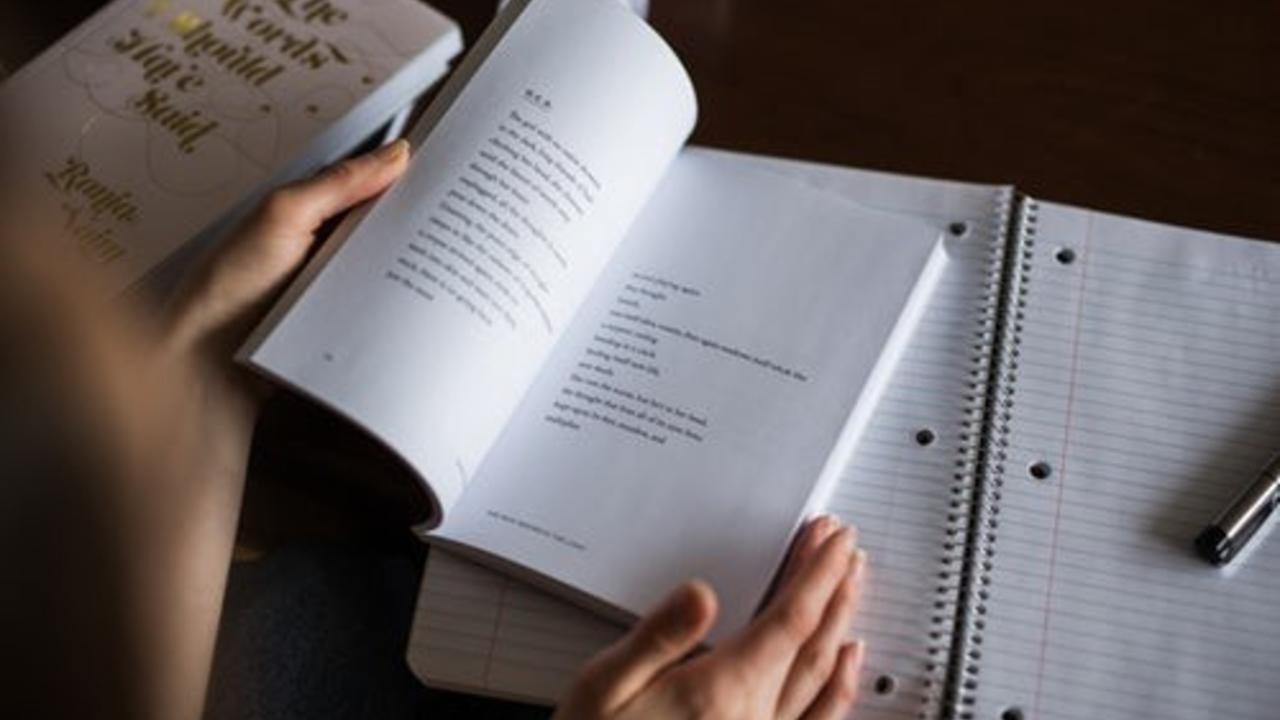 This is taken from today's Facebook Live in my  FB group, Communication Nation. Join the group to watch the full video training. https://www.facebook.com/groups/communicationnation/ 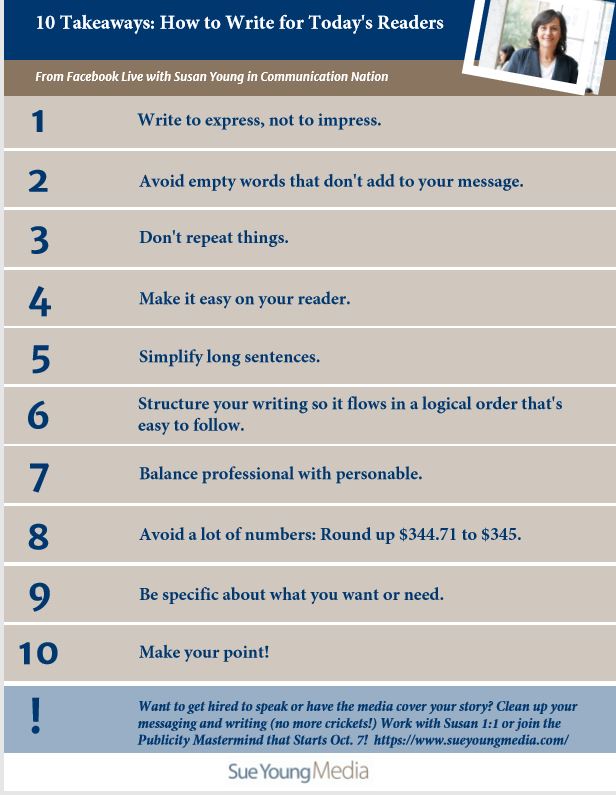 An Empath and a Badass Walk Into a Meeting... 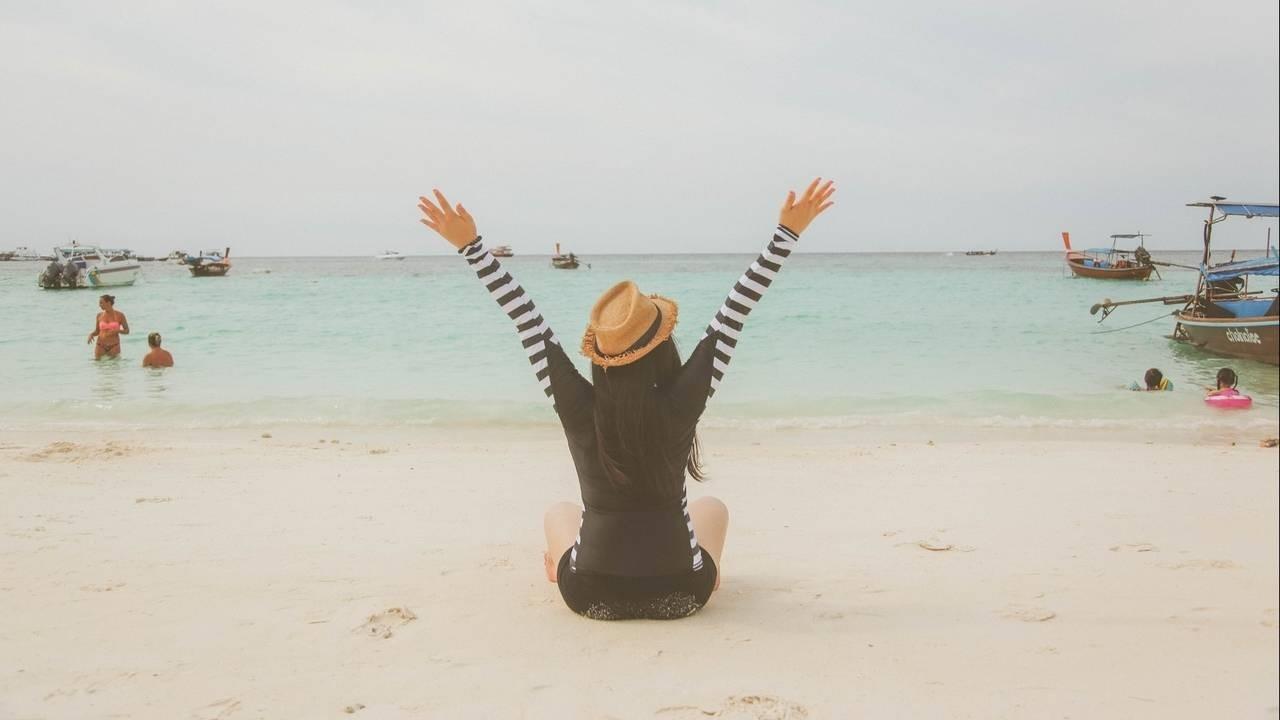 What happens when an empath hires a badass for coaching?

It’s not every day that deep and revealing moments happen in our businesses and lives. Often, we work to “move the needle” and “plant the seed” and all the other clichés. We wait to see if our efforts bear fruit. We grow impatient. But we grow because we want to live our life’s purpose and share our gifts with others so they can be better, stronger. We all want to discover—and live—with purpose and make meaningful contributions to the world.

[FREE DOWNLOAD: THE VISIBILITY ROADMAP TO GROW YOUR BUSINESS & MAKE A GREATER IMPACT]

When the stars align and we can answer Simon Sinek’s “Start with Why” and the “why you do what you do” makes sense deep within our souls and not our heads, we’re on the right path. It’s our calling, our purpose for being here in this moment called life.

The #1 Secret to Phenomenal Pitches and Getting Media Interviews 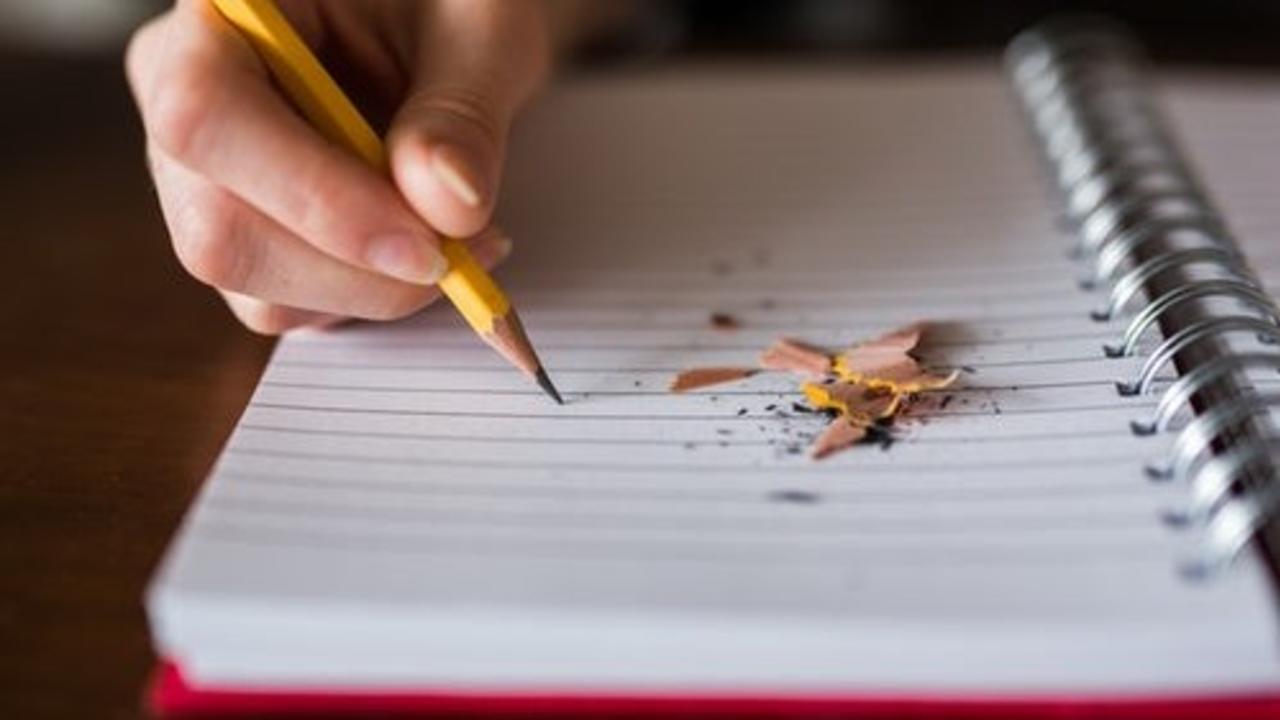 Most entrepreneurs enjoy a flood of ideas, creativity and a-ha moments.

How do you explain your idea to someone else, especially a busy reporter or online influencer who receives irrelevant email and phone pitches daily?

Here’s the secret: Take out your business card. Write your idea on the back of your card. If it doesn’t fit, rip it up and throw it out. Nobody is going to understand it if it’s not clear, concise and compelling.

[Join Communication Nation, our Facebook Group for Professionals Who Want to Communicate with Confidence and Clarity]

The “business card” approach is how you have to think of your pitches to reporters and online influencers. When emailing a pitch, for example, all you have is a few words in the subject line to grab someone’s attention.

The subject line must be a magical combination of just the right words…and in the right order. You’ll have to practice and edit. Being clear—and brief... 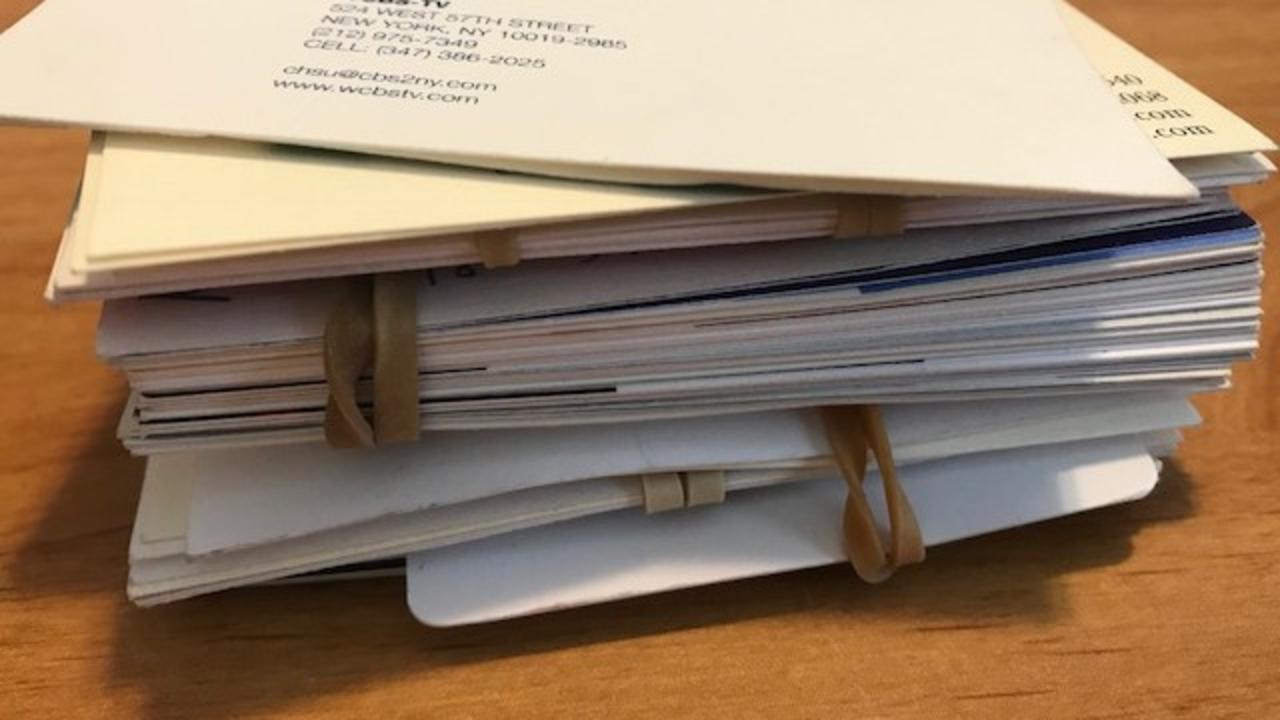 Business cards aren’t going out of style anytime soon, but there is one serious misuse of these calling cards that I want to share with you.

I recently went to a networking event with about 300 people. A client had invited me and then got stuck downtown at jury duty. With the delay—and rush hour traffic—she didn’t make it. Did I run back to my car and say, “Oh well…” No.

Even though I didn’t know anyone, I stayed,  mingled and watched.

And I remembered a lesson from many years ago about business cards: Don’t give anyone your card unless they ask for it.

It’s a waste of our collective time –and paper. I’ll bet most business cards given without being requested land in a:

When we take a few minutes to connect human-to-human with a meaningful conversation and rapport, we can then decide to hand over a card. Not everyone will be a good fit...

How to Be Visible in a Noisy Content World 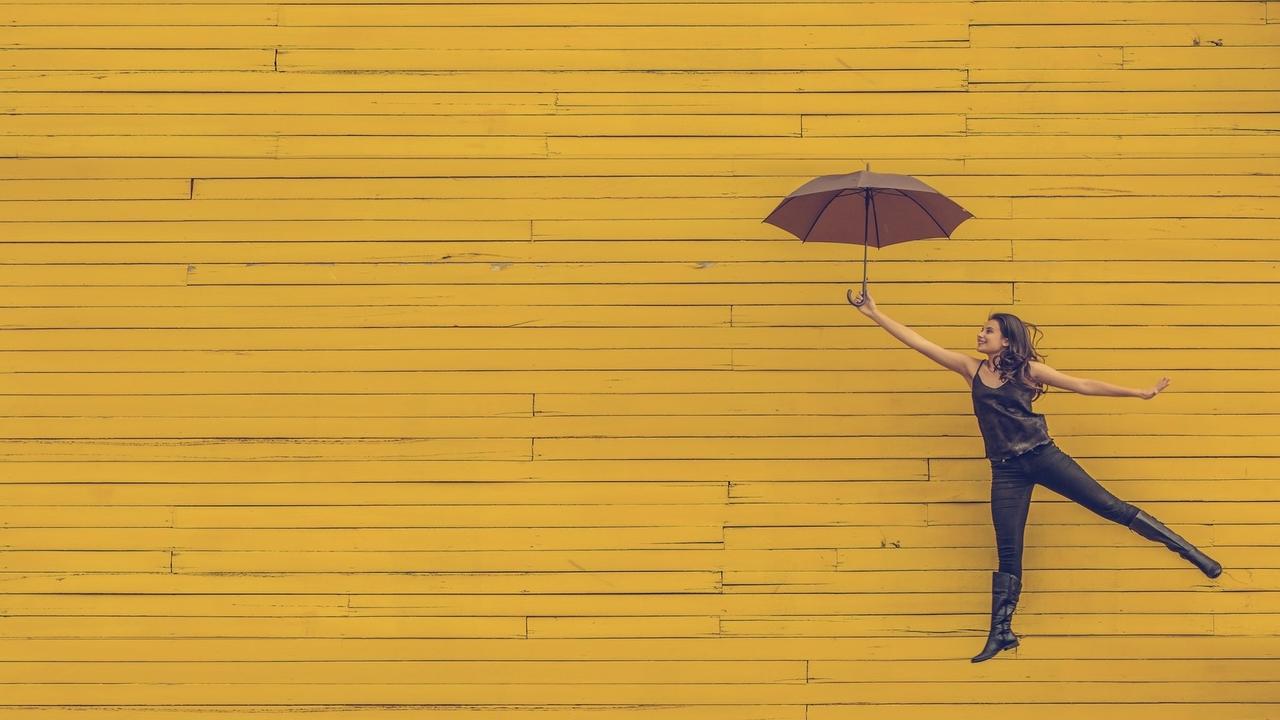 I’m a middle child, and, over the years, people have asked me how I managed to get noticed. After all, my older sister was the (almost) perfect “Marcia Brady,” and my younger sister was “the baby” who could do no wrong.

The real lessons, however, on how to stand out, came from my extended family, sprinkled across New Jersey and New York.

I didn’t truly understand how “different” we were until I had children of my own. My “kids”—now 25 and 23—asked me questions when they were younger that most parents DON’T hear:

5 Common Rookie Mistakes to Avoid When Looking for Publicity 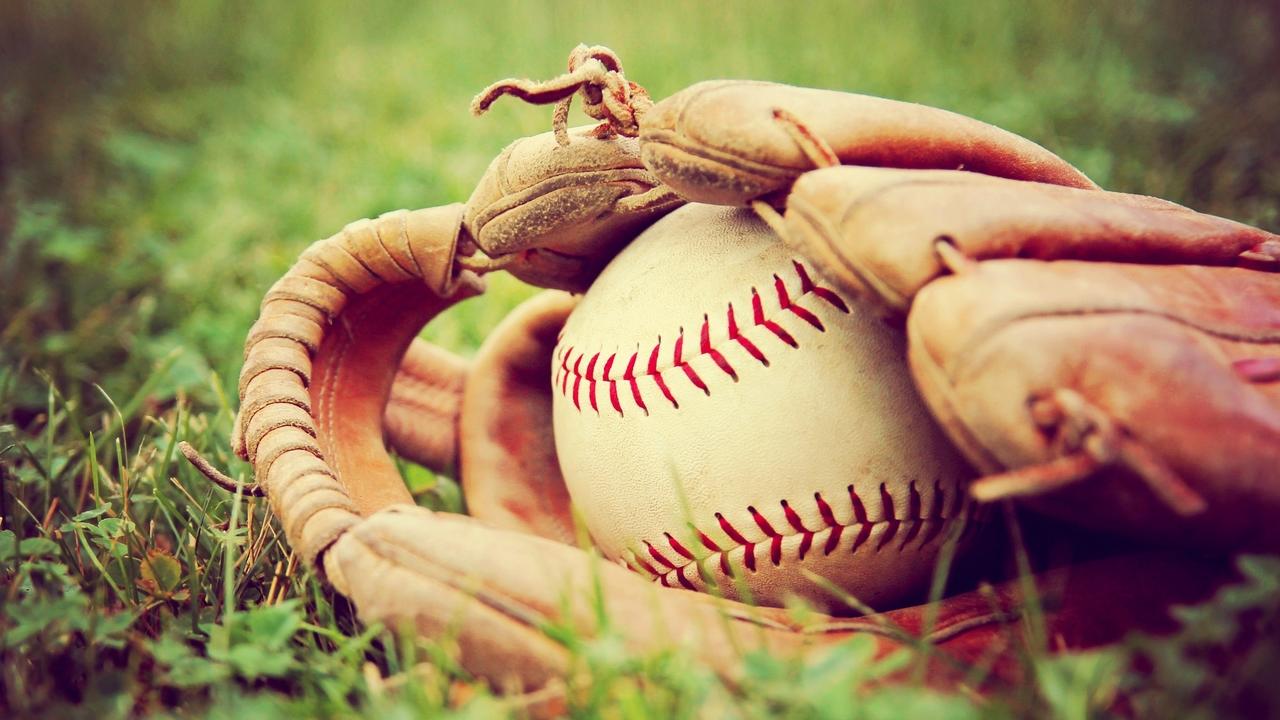 “If you want to attract media attention, think like a reporter.”

It’s something many professionals who want to be more visible must learn. But what does it mean? How do reporters think? And why do you need to be privy to this information?

You can’t effectively pitch stories to anyone in traditional or social media if you don’t understand how their minds operate.

How do journalists, bloggers and podcasters decide what is newsworthy and what gets tossed?

I was a news reporter. Please, allow me to share these five common rookie mistakes small business owners should avoid when looking for publicity:

Rookie Mistake #1. I can sell my products and services with an article, post or interview. It’s all about me! When pitching a self-serving story that fails to connect with a specific audience, you’re missing an...

What it Means to Get in Front 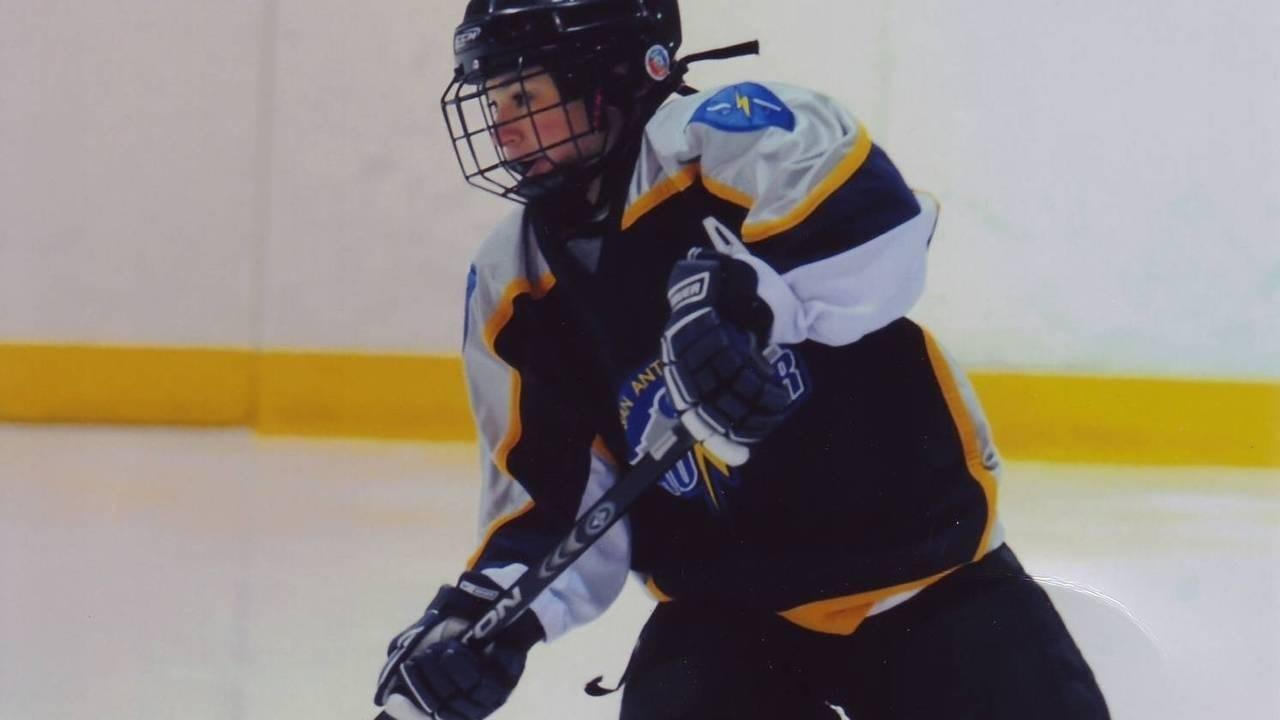 People often ask me about the "official" name of my publicity training company, Get in Front Communications.

Get in Front is a constant reminder to me to be proactive. It goes back to one of my "signature stories" when I speak and train people. It's about my husband Andrew, our son Danny, and the game of ice hockey.

When Danny was seven-years-old and learning to play hockey, Andrew, who has been on skates since he was four, told him, "Get in front of the net, the puck, and  the other players."

Danny didn't understand, and with a puzzled look and a shrug of his shoulders, he quizzically asked, "Why? Why should I get in front?"

Andrew's response was simple and it applies to each of us.

"Because that's where all the action is. Nothing exciting happens to the guys who hang out in the back. Get in front of the net, the puck, and the other players. Get in front and make... 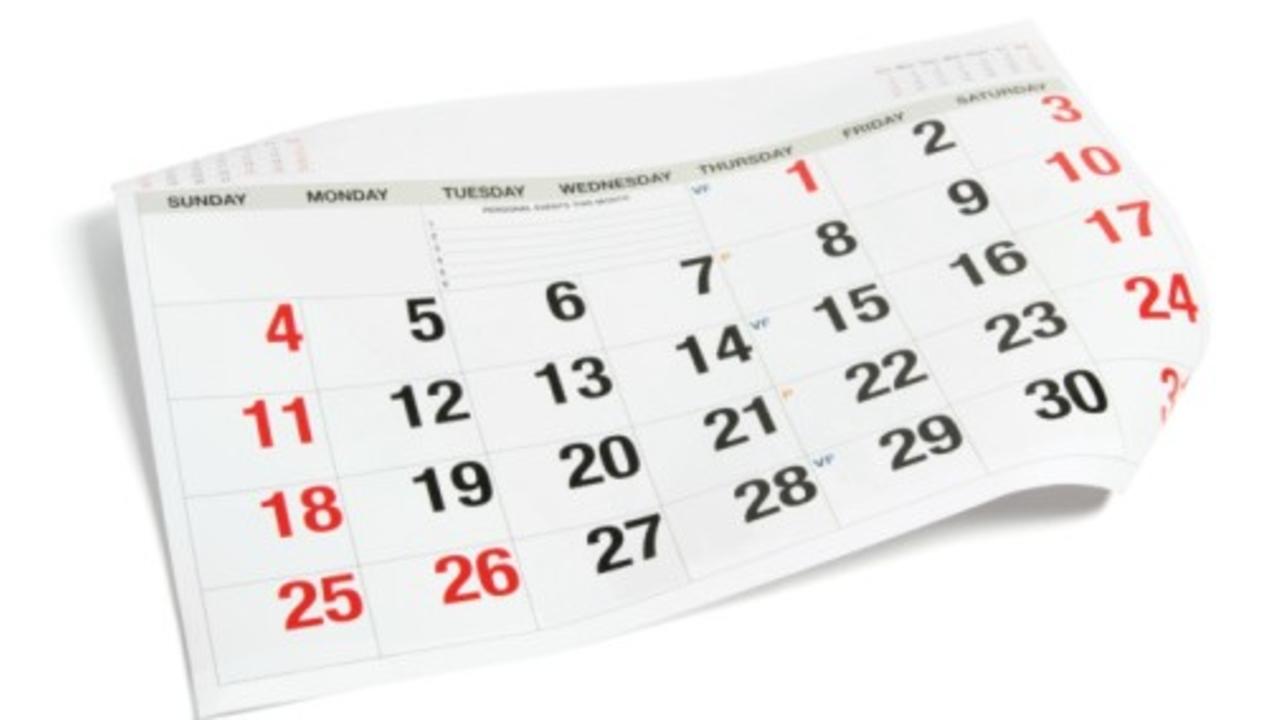 In a perfect world, we could put a pushpin on a calendar date and plan out days, weeks and months of special events, announcements, contests and news to share. Wow, an entire road map of content, blog topics and email promos. It would work out just fabulously.

[RELATED: To continue learning about communicating with confidence and clarity, join Communication Nation on Facebook.]

Of course, anyone who has walked the planet for a few decades knows that social media—and breaking news—can quickly push our best-laid plans out the window. If the TV interview you’ve been working on for weeks has arrived but there’s a major earthquake in California, your big moment might be rescheduled—or axed. That’s why you—and your editorial calendar—must be flexible.

Templates that allow you to easily track—and...